From Coverage to Response Performance

Traditionally, station location models have relied on the concept of “coverage” to determine the best locations. The main drawback to these models is the binary nature of “coverage”, where demand locations are either “covered” or “uncovered”.

What does this mean?

If a demand point can be reached within a target response time, the demand point is considered covered. For example, these models say that if a call is 7:59 minutes away, it is covered, but if it is 8:01 minutes away, it is uncovered. This can often bias station spacing, encouraging sub-optimal placement that hinders your service to the community. As well, this measurement provides no accurate way to project the impact of new resources on your performance targets and standards.

Consider, for example, figures 1 and 2. In both figures, the centre of the circle is the location of the emergency services stations. 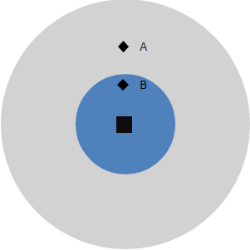 Figure 1 is a representation of a Binary Coverage Model. The dark circle represents the area around the station that is “covered” by that station. The light grey circle is the area around the station that is “uncovered”. As you can see, with the Binary Coverage Model, all demand from node B would be considered “covered,” whereas all demand from node A would be considered “uncovered”. 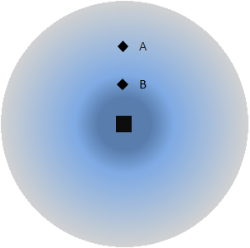 Figure 2 is a representation of a Probabilistic Coverage Model. In this figure, we represent coverage as a gradient, where demand nodes closer to the station have improved coverage compared to those that are farther away. Instead of evaluating only the travel time to assess coverage, we model the probability that a unit can arrive at a location within a certain time target. As you can see, with the Probabilistic Coverage Model, all demand from both nodes A and B would receive coverage; however, node B would receive better service.

Use expected performance when possible

Whenever possible, you should use expected performance when re-configuring stations. This approach has been shown to be very accurate in terms of predicting coverage changes as it accommodates the realistic variability that occurs. You will not only place stations where they are needed the most, but you will be able to more accurately predict the impact of adding or moving stations.