By Daniel HaightArticle
No Comments

Municipalities come in all shapes and sizes and their boundaries are set for all kinds of reasons. These reasons do not include emergency response effectiveness. For one, populations don’t grow in concentric rings from the middle of a district. Properties are developed haphazardly and call locations are lumpy. Sometimes developments grow on the edge of the boundary to take advantage of a nearby metropolitan center or localized services

In short, municipal boundaries are not ideal service area boundaries.

This fact is well-recognized and most emergency services have developed aid agreements to compensate. In general, the agreements take two forms: mutual aid and automatic aid.

Mutual aid is simply a “we’ll help if you call us” agreement. It is typically used to deal with large events that a single service can’t handle. Mutual aid doesn’t increase efficiency, but it does increase surge capacity.

Automatic aid is more tightly integrated. The closest vehicle is sent to the incident, regardless of the service boundaries. Generally, this is done through dispatch.

We find it useful to look at four different levels of cooperation – all of which ignore boundaries in different aspects of the planning and response process:

For example, the map image below shows areas along the boundary of Edmonton and Strathcona county. The outlined area is probably several minutes closer to Strathcona County Fire Station 1 than either Edmonton station. 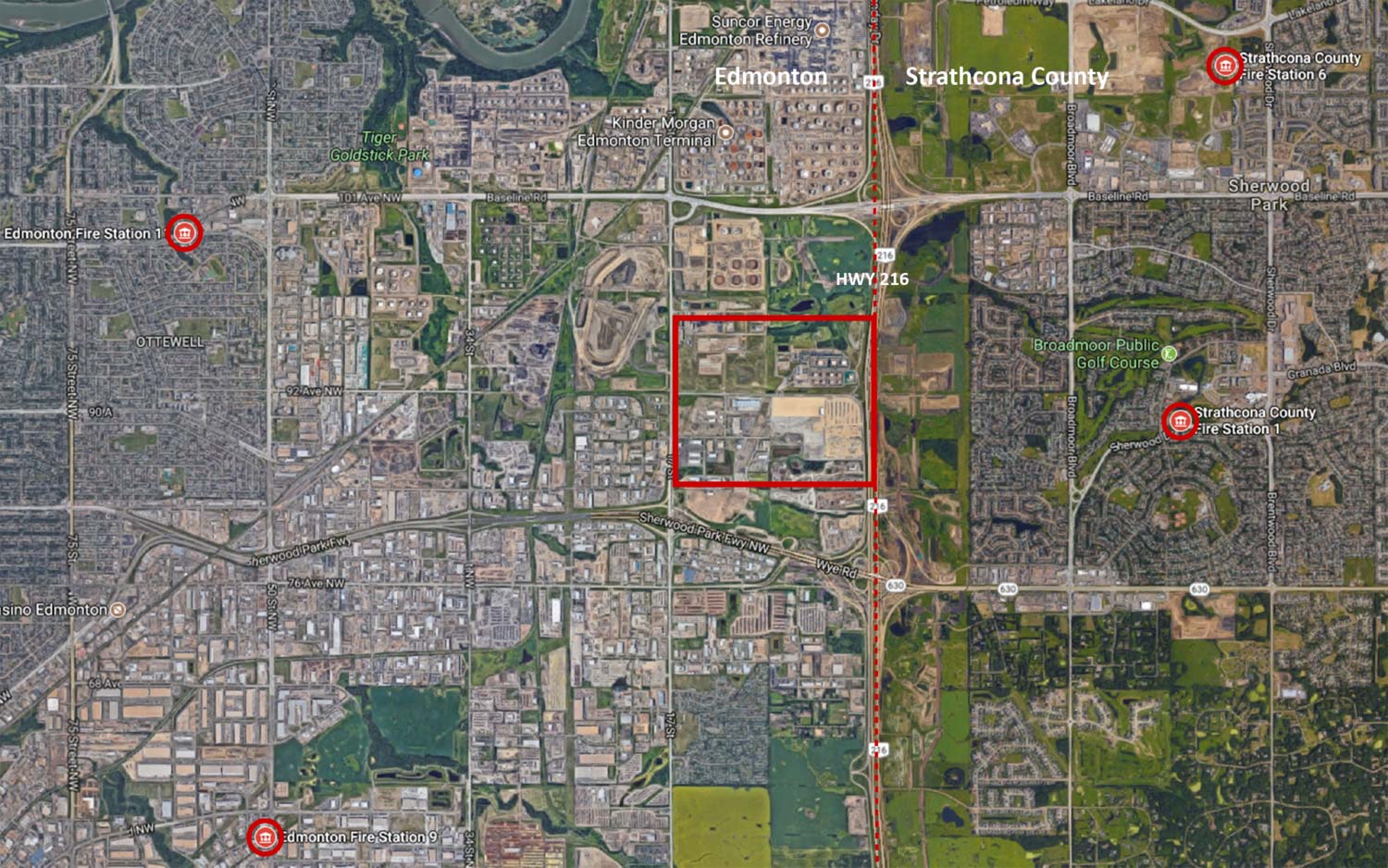 That area, and several others along the boundary (Highway 216), could be candidates for an automatic aid agreement. There would be a costless performance gain from boundaryless dispatch.

Tighter integrations are possible though. There are some situations where it makes sense to integrate deployment, not just dispatch. For example, the Town of Devon (at the bottom right of the map below) is on the very edge of Leduc County (the river is the boundary between Leduc and Parkland). Devon is closer to any calls in the bottom half of the map, but if it followed municipal boundaries, it would never respond to these. 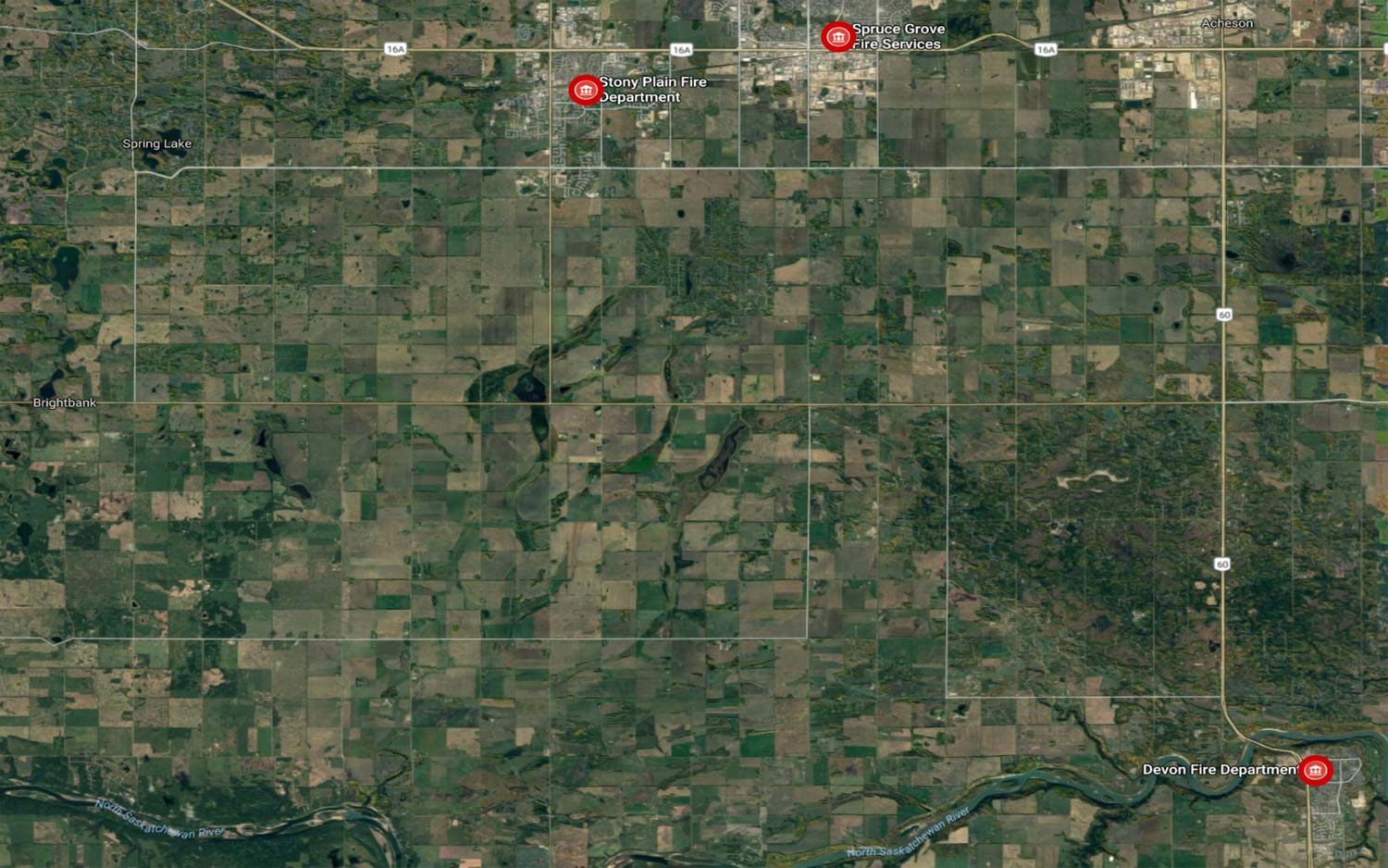 Fortunately, the two counties share responsibility for the Devon Fire Department and its response area straddles the river.

This is an example of boundaryless deployment. Staff and resources are permanently housed in Leduc County with the expectation that they will respond equally into Parkland County.

Provincial EMS systems in Alberta and British Columbia have gone further. At times of high call volume, they may flex or redeploy a vehicle from a relatively quiet community to a busy one in anticipation of future calls. We could think of this as boundaryless redeployment.

In reality, it’s not boundaryless (all the ambulance resources are operated by a single health authority). But it is possible to imagine an automatic aid agreement whereby vehicles would not only respond to calls but would flex across municipal boundaries in anticipation of calls.

Finally, if resources are being dispatched, deployed, and redeployed across boundaries, there is nothing stopping communities from implementing boundaryless station planning. Station resources would be placed where they best serve the population irrespective of the population’s municipality.

So how much benefit is there in ignoring the boundaries?

We looked at both the greater Edmonton and Calgary metro areas to see what impact the boundaries had on each municipality’s performance. Each metro area contained a handful of municipalities serviced by a smaller number of dispatch centers. We collected several years of call data for each and calculated a modeled drive time from each station to every call. From this, we could see when the ideal unit was sent and when it was not.

We found the following:

Only those municipalities with shared dispatch were benefitting from cross-boundary support.

We were unable to test the value of boundaryless flexing, but it would probably be similar to deployment at 1%. In total, ignoring boundaries increased response performance by 10%.

In these examples, the biggest opportunity was found in dispatch. And it’s likely that this will be the case in most centers. Thus, centralizing or harmonizing dispatch is a great place to start. It also avoids the issues around governance and risk that deeper connections engender.

So why aren’t boundaryless practices more common? In some cases, it is simple politics. Communities rarely want to give up control of their resources or to trust their citizens to a neighbouring service. Secondly, the relationship is unlikely to be symmetrical. I.e., most of the aid would flow in one direction. Finally, the agreement may reduce call volumes for a service and make it more difficult for them to justify their resource levels.

In spite of these issues, consider the following: people cross municipal boundaries all the time for work or entertainment. And when they’re in an emergency, they don’t care what name is on the side of the truck that rescues them.